Well I finally got around to finishing this massive unit of Kabalites.  Oddly enough I was working on a Corsair conversion and wanted to buy six Splinter Cannons.  This resulted in the bitz company accidentally sending me 20 Kabalite Warriors.  I offered to send them back but they told me to keep them since it was an error on their end.  For about seven years they have just been legs on bases... but a few months ago I got off my butt and got around to putting them all together.  While having one token Kabalite unit for Ynnari is okay, I feel like they deserve the same kind of potential game play as my Harlequins.  That means I need to start focusing on completing the Drukhari units I have unbuilt and unpainted.  I just got one large step closer with this unit: 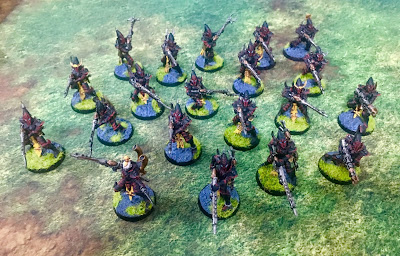 At 20 warriors strong my aim is to use the webway stratagem to pop this unit in at about 15 inches from the enemy and unload.  15 inches is because my paint scheme really fits Obsidian Rose, and since there's no fluff about a specific Kabal working with Ulthwe or Midnight Sorrow I'm going to move forward with that as my Kabal.  With two shredders in the unit I might be able to get lucky and pack two or three reliable kills to the units firepower, compared to my pitiful rolling for poison wounds.  With the way I roll for poison weapons I might as well only wound on a 5+.

At this point I still have ten more Kabalites to assemble and paint, an Archon, a Succubus, and three bikes to paint.  At some point I need to grab three more bikes, and one more court member, and then I can look at picking up two more Raiders.  From there I'll have a functional battalion from a Kabal to build off of, and a patrol of Wyches.  Technically I can make a Vanguard of Incubi and Mandrakes as well, but I much prefer my Mandrakes as one menacing unit rather than two small squads.  It's just a way of farming CP while my force grows.

While I like the idea of a fluffy raiding force with a coven splitting the difference I am not enthused about the amount of work it will take to get there since a coven doesn't play well with Ynnari.  Every time I try and build a 2k force around a raiding force I find myself padding out the basics so much that the force really feels like it suffers against too many army types.  The prevalence of Knights in particular is a worry for that type of classic force.  Don't get me wrong, Knights are not a weak point for the army, but it certainly is for the raiding force, because it emphasises a splitting of resources that dilutes the type of focused list that really competes with knights.

The Ever War Book Series